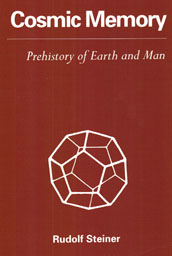 Cosmic Memory, GA# 11
by
Rudolf Steiner
Prehistory of Earth and Man
Published by Steiner Books in 1990
A Book Review by Bobby Matherne ©1998

In addition to painting a broad picture of the prehistory and future history of the Cosmos, Steiner presents a penetrating analysis of the limitations of materialistic science.

[page 29] However fruitful the materialistic point of view has been as a scientific working hypothesis, however fruitful it will doubtless remain in this sense in the future - I point only to the successes of structural chemistry - just as useless is it as the basis for a world conception.

As I pointed out in my The End of Science review, one can understand Steiner's point by imagining all sensory-based materialistic science as an iceberg calved off the mainland of the sensible and super-sensible reality that Steiner describes in this book. One can easily map from the mainland to the iceberg and make rational deductions in that direction. But in the other direction, from the iceberg to the mainland, the mapping fails because it lacks an acceptable target, one that fits the narrow definitions of acceptability to the materialistic scientist. Deductions made by such scientists can only arrive at the conclusion that the iceberg is all that exists, that the mainland is a Fata Morgana induced by fear and need [love], the "mothers of religion." Steiner deftly rebuts such thinking:

[pages 256, 257] It is not even considered remotely possible that there could be a true experience of supersensible worlds, and that the feelings of fear and love then cling to the reality which is given by this experience, just as no one thinks of water when in danger of fire, of the helpful comrade in the peril of combat, if he has not known water and comrade previously.

Materialistic science is thus exposed as using the argument that "the mainland doesn't exit because everybody knows it doesn't exist." Steiner says that the mainland exists because its very existence infuses and enlivens each and every one of us, including the skeptical scientists, who use the very kind of logical "deduction to support their belief that they represent as improper in their adversaries." [page 257]

The only way for such scientists to remove their superstition that fear and need have created this illusory mainland of reality is to become familiar with the super-sensible facts using that most delicate of all instruments, their own human bodies.

[page 261, 262] The one who is able to struggle through to this view will no longer be held back by the idea that he might be estranged from reality and practical life by occupying himself with the science of the spirit. He will then realize how the true science of the spirit does not make life poorer, but richer. It will certainly not mislead him into underestimating telephones, railroad technology, and aerial navigation; but in addition he will see many other practical things which remain neglected today, when one believes only in the world of the senses and therefore recognizes only a part of the truth rather than all of it.

The other major issue, the evolution of man and the solar system, fills the rest of the book. The original state of our solar system was that of a spinning gaseous mass, as materialistic science teaches, and out of that huge vaporous cloud, the planets and Sun condensed. But no scientist has ever laid out exactly how the Sun and planets did this, in which order they condensed, etc, up until now.

Steiner describes to us the process as he experienced it directly through his super-sensible sight. The reader may read Steiner's explanation of the process and decide if this is a plausible description that fits with what is sketchily known of the process by materialistic science. Steiner calls the first stage of evolution, Saturn. It divides into two masses, one destined to become the outer planets and the other the inner planets including the Sun and earth. Later the inner portion separates into two parts, the Sun and the earth-moon. The Mother Sun collapses until it begins radiating light and other forces to its orbiting offspring, the earth-moon. Later the moon separates from the earth and begins orbiting the earth. Once again the Mother Moon sends its forces and reflected light from the Sun to its offspring Earth, which offspring also receives the forces and light directly from its Grandmother Sun.

In the Saturn, old Sun, and old Moon phases, human consciousness was present and was moving through various scaled levels of evolution, stages that Steiner describes meticulously in the body of this book. In Arthur Young's Geometry of Meaning he presents a seven-step scale of levels in the form of a V: the first three steps progress down the left arm of the V and the last three steps ascend the right arm of the V. The fourth step is the vertex, or pivot point of the hebdomad. Steiner uses a seven step scale in many areas during the development of his cosmology. Often the seven stages of evolution have seven sub-stages between each major stage. Even though Steiner doesn't refer to the pivotal nature of the fourth stage, it is easy to discern for oneself that such pivot points exist at stage four of each hebdomad.

It shows up in Chapter 3 in the Seven Atlantean Sub-Races:


We see the progression down to the ego at stage 4.) and rising to a transcendence of the ego in stages 5, 6, and 7. A similar hebdomad exists for the cosmic evolution of humankind:

Each of the seven stages evolve through seven sub-stages and Steiner describes the characteristics of each sub-stage. One can see in this hebdomad that the fourth stage is the pivotal point where the descent into the physical body has reached its culmination, and the subsequent ascent into the spiritual realms begins again. This is the current state of humanity: at the deepest point of its descent into the material world.

In Chapter 8 Steiner goes through an incredible four or five pages of exposition in which he describes in detail how we humans of this fourth stage of evolution came to fill our souls with the physical world to the exclusion of the spiritual world, up until now. In this book Steiner has clearly established his reverence and respect for the achievements of materialistic science, and he has offered a comprehensive explanation of how we came to have materialistic science. This is the comprehensive treatment one would expect from the mainland: to be able to describe how the icebergs of materialistic science formed and the very reason for their formation.

In describing the future course of the evolution of humankind, Steiner describes the future evolution of our human organs, how some will become more important and some less important. Of particular interest is how he describes the evolution of the human heart. He explains that smooth muscles are associated with involuntary muscular control such as those in the intestines, which move without conscious intervention, or those that control the opening of the pupil of the eye in the iris. The voluntary muscles are transversely striated, such as the muscles of the legs and arms. He points out that our heart muscle has the striated patterns associated with voluntary movements, even though it is commonly thought of as an organ with involuntary movements. Steiner says that's because it is soon to become an organ of volition, executing motions that will "be the effects of the inner soul impulses of man." More interestingly, he claims that the commonly held view of the heart as a pump that causes the blood to circulate is backwards. Here's how he says it:

[page 240, 241] Turning pale through feelings of fear, blushing under the influence of sensations of shame, are coarse effects of processes of the soul in the blood. But everything which takes place in the blood is only the expression of what takes place in the life of the soul. However, the connection between the pulsation of the blood and the impulses of the soul is a deeply mysterious one. The movements of the heart are not the cause, but the consequences of the pulsation of the blood.

October 22, 2013 Update: I received a link to this enlightening article which says, among other things,

In 1932, Bremer of Harvard filmed the blood in the very early embryo circulating in self-propelled mode in spiraling streams before the heart was functioning. Amazingly, he was so impressed with the spiraling nature of the blood flow pattern that he failed to realize that the phenomena before him had demolished the pressure propulsion principle. Earlier in 1920, Steiner, of the Goetheanum in Switzerland had pointed out in lectures to medical doctors that the heart was not a pump forcing inert blood to move with pressure but that the blood was propelled with its own biological momentum, as can be seen in the embryo, and boosts itself with “induced” momenta from the heart. He also stated that the pressure does not cause the blood to circulate but is caused by interrupting the circulation. Experimental corroboration of Steiner's concepts in the embryo and adult is herein presented.

In Chapter 15, Steiner describes what he calls a fundamental law of development. I have noticed that at various stages in my life, friends seemed to disappear or become somehow inappropriate to my new situation. Here's what Steiner says about that:

[page 193] It can be seen that man ascends into a higher realm by thrusting a part of his companions down into a lower.

In Chapter 19, Answers to Questions, Steiner explains how evolution progresses by the dropping into unconsciousness of processes that were once conscious. Like subroutines called by a new main program, the old processes are used as building blocks to form the new level of evolution of humanity. Thus no capabilities are lost, only embedded in newer processes. It has been my thought that whatever one human being could in the past or can do now, all human beings can do, and are doing out of their awareness all the time. This insight of Steiner seems to confirm my guess. It is comforting to know that the troubles and learnings of all our lifetimes produce capabilities that are never lost, but rather are built upon as the basis for the evolution of all humanity.

To Obtain your own Copy of this Reviewed Book, Click on SteinerBooks Logo below.