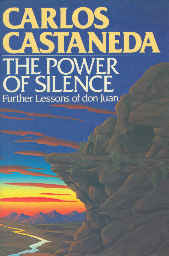 The Power of Silence
by
Carlos Castaneda

In this book Carlos does what he must do after killing off a major character — he brings him to life by recounting a memory. Don Juan lives once more in this book. Not as the omniscient guru, but as a vulnerable, stupid nagual apprentice to his two benefactors: Julian and Elias.

Julian is the clown and stalker; Elias the wise and the explainer. Here we find Don Juan exhibiting all the behavior that in earlier books Don Juan (at a later point in his life) chides Carlos for exhibiting: reading a lot, always wanting explanations, being stupid, etc.

This book, at times, takes on an aura that makes you forget it's Don Juan reminiscing, so much does he remind you of Carlos. Its strength is that it captures much of the flavor of Carlos's early books: the teacher and the pupil interacting. Only this time it's Don Juan the pupil and Julian/Elias the teachers. Of course, Carlos is the listener to these recollections, and he asks Don Juan some stupid, as well as thought-provoking questions.

Don Juan's explanations and answers to Carlos's questions are the meat of the book. They detail the processes to which Don Juan had subjected Carlos and his other apprentices, as detailed in Carlos's earlier books. The processes I found which showed up as adventures in the other Don Juan books are described and named in detail here.

The processes are: stalking, intent, moving the assemblage point, controlled folly, place of no pity, and silent knowledge. The last one gave this book its title. The Power of Silent Knowledge is likely how it reached the publishers, who suggested the more mysterious and impactful, Power of Silence.

The theme of this book is silent knowledge in its many forms, and it gives names to each of the forms. One might think of silent knowledge as the "sound of one hand clapping." Or what Alfred O. Korzybski called WIGO, What Is Going On. Or what Wittgenstein call the unspeakable. Or Bandler and Grinder in NLP called the deep structure. It is a part of the unfathomable reality that presents itself to us in a "blooming, buzzing confusion" that we must perceive, abstract, and make sense of.

Don Juan refers to it as that deep intuition which, when it comes, is not noticed as an intuition at all, unless one has been trained as a warrior to notice when silent knowledge appears. "Where is the basket wherein the fruits of one's mind appears?" asked Jane Roberts in one of her books. Don Juan answers in silence.