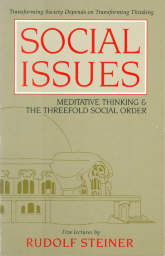 A READER'S JOURNAL Social Issues — Meditative Thinking and the Threefold Social Order, GA# 334
by
Rudolf Steiner
Five Lectures given in Basel and Zurich in 1920
Published by Anthroposophic Press in 1991
A Book Review by Bobby Matherne ©2003

On the cover the super-title above Social Issues says, "Transforming Society Depends on Transforming Thinking." An apt summary of the book; it could be expanded to include, in addition to thinking, transforming feeling and willing, which, with thinking, comprise the threefold order of society.

If one has carefully ingested Steiner's landmark book, The Philosophy of Freedom [a.k.a. Spiritual Activity], one can understand this series of lectures as an expansion of the theme developed in that book to each aspect of the threefold order. To help the reader focus on the effect that a lack of freedom or spiritual activity has on society, Steiner pinpoints a phrase for each aspect, and these three phrases become a recurrent theme throughout Social Issues, repeated again and again, like themes of a Mozart concerto. These three themes and their associated areas are shown in the table below in the column labeled "Detrimental Effect":

This table is an outline and can do nothing but point to problems and solutions. Anyone currently under the influence of the empty phrase will interpret the table as full of empty phrases. Anyone under the influence of convention will relate to the table out of their conventional attitude, and might think, "I never heard of this foolishness before!" And anyone whose life is ruled by routine will assume that here is another set of rules to follow, and might think, "Hey - I've got enough rules already!"

Let us begin our repast with the empty phrase.

[page 43] A closer look at the nature of our way of thinking, shaped and permeated by science, reveals that it acknowledges only one part of our being, namely, the intellect.

[page 94] In our time of the flowering of the natural sciences, the words we use have not received any new meaning. It is historically extremely significant that in the last three or four centuries all languages of the civilized world have lost their old meaning. No new meaning could be poured into them because the natural sciences that achieved so much in our day are unable to provide such new meaning. And so, in our time, which we have to admire in many respects, we also see the languages of the civilized world being emptied of their ancient spiritual meaning.

As they lost their ancient instinctive meaning without receiving any new meaning from the natural sciences, the languages of the civilized world degenerated to mere empty phrases, a development that has culminated in our time. These empty phrases lack any even limited meaning, and have in fact now achieved dominion over the world.

A learned professor from the West wanted to meet a famous sage in the East and learn from him. He was invited for tea. The ancient sage poured the tea into the professor's teacup, and, as the tea filled the cup to the brim, he continued to pour the tea, which spilled over the sides of the teacup, scalding the professor's hand. Dropping the teacup, the professor exclaimed, "Can't you see the teacup is full? You can't pour tea into a full teacup!" To which the sage replied calmly, "Yes, you are right. Unless one brings an empty teacup, one cannot receive new tea." The learned professor, with his mind packed with knowledge, lacked the "intellectual humility" necessary for him to learn anything from the sage, up until then.

To bring an empty teacup is to have intellectual humility. To say to oneself, "You never know until you find out" and "There's allways even more" is to open oneself up to intellectual humility and the possibility for spiritual-filled thinking is seeded. This is the essence of applying the principles of spiritual activity to our language so that in time the empty phrase may be replaced by language filled with the content of our souls. This is also the essence of freedom: to speak what is true in one's soul regardless of the empty phrases, conventions, or routines of the time.

Now, let us continue our feast with conventions.

[page 102] If the empty phrase and talk without content predominate in our spiritual-cultural life, then what comes out of these phrases, especially what can be learned in social relationships, will also not be able to enter into our feelings and emotions.

Thus Steiner shows us how a people, a culture filled with the empty phrase must evolve into a culture of coercive laws instead of a spirit-filled direct individual relationship. A topical example of the devastation that can be wreaked by the empty phrase comes to mind. The president of the United States of America in 1998 is proposing a patients' "bill of rights" that will coerce health care providers into providing services that they have not otherwise agreed to provide in their one-to-one relationship with their patients. Since the original ten clauses of the U.S. Constitution known as the Bill of Rights has, as its sole purpose, the removal and elimination of coercion, the confiscation of the freedom-filled phrase bill of rights to create coercion is a travesty, an example of the worst kind of inverted doublespeak and pernicious obfuscation. It should be clear that the bill of rights is now officially an empty phrase.

[page 103] Convention has robbed another area of our society of its content: it has made our social relationships as barren as the empty phrase has made our soul life.

And we now finish off the third course of our threefold dinner with routine. Steiner describes how it comes into being as a result of the empty phrase and convention thus:

[page 103] The empty phrase cannot stimulate a truly conscious will in us. When our cultural-spiritual life becomes dependent on the outer political, legal, and economic conditions, it degenerates into empty phrases. And when our laws themselves are fed only by empty phrases, they become mere conventions. Similarly, if our will is not moved by the spirit, our economy and the area of human relationships will be based on mere routine rather than on the experience of life.

What does this routine mean in terms of our current society and economy? Steiner's words speak to us as though they appeared in the newspaper this very morning.

[page 103, 104] To look at our society and economy as they really are is to see that we must put an end to the currently prevailing chaos of everyone wanting to acquire things out of egoism without taking into consideration the relationship between our own individual production and that of society as a whole.

I think it sounds like Steiner is talking about the rampant consumerism of the 1990's, don't you? Since the problem of routine in the economy begins with the empty phrase in the cultural-spiritual sphere, proceeds to permeate the area of law with convention, and results in the routine in the economy, the transformation of society must begin with transforming our thinking into spirit-filled thinking and filling our lives with thought-filled spirit. Then the laws will result, not from the empty phrase, but from the spirit-filled inter-relationships that develop over long periods of time. With these two areas of the threefold order in place, we will be ready to replace the routine of everyday life and the workplace with a "true practical experience of life."

This writer is helpless to create a better concise summary of the threefold social order than Steiner does in the following passage.

[page 107] Nowadays we see all too many empty phrases, conventions, and routine as well as their result: chaos. For the future we need words filled with thought, spirit filled with substance, and living laws that have grown organically out of the working together of all adults. Then the spirit will have replaced the demon. In the economy, we need associations growing out of the spirit, and we need the elimination of routine through a true economy based on the spirit. That means that the demon of our time will have to be replaced with spirit in the future. We can rise above the pessimistic outlook seemingly justified by outer life and gain hope for the future by refusing to build on the hopes that might be thrown our way. Instead, we must build on our own will, which wants to achieve the victory of spirit over the demon out of its own power, persistence, and passion.