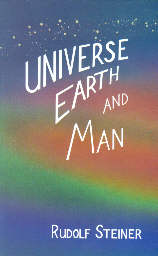 The following table will describe the evolution of humans, animals, plants, and minerals according to Steiner. One should know that Old Saturn was the first body in the solar system, a kind of primitive nebula, and that it split off into the Old Sun which later split into the Sun and the Old Moon. The Old Moon split into the Earth and our present Moon. The table below shows these major epochs of the differentiation that proceeded from this early nebula to our present Solar System.

The rightmost column shows the systems that correspond to the four human bodies. The skeletal structure corresponds to the physical body; the glandular system, to the etheric body; the nervous system, to the astral body; the blood circulatory system, to the ego. At one point Steiner says that blood pressure is proportional to ego, something most cardiologists can readily attest, I suspect.

This chart shows dramatically how each separation of the components of the Old Saturn system was accompanied by the pulling of a new body out of the primeval physical body. The etheric body first appeared when the Old Sun separated from Old Saturn, the astral body when the Old Moon separated from the Old Sun, and the ego body when the Earth separated from the Old Moon. Each physical separation left behind a new feature that is present in every human body today. Thus one can see that the entire evolution of the Solar System as experienced on the Earth is recorded by the structures that comprise the human body.

How are all these things possible? Here's what Steiner says about what happened when the sun withdrew from the earth-moon still combined into the Old Moon:

[page 33] With the sun the most lofty beings and the finest substances depart; henceforward they will work upon the earth from the outside.

And when the sun and moon gradually separate from the earth:

[page 33] With the sun go all the beings who, had they remained united with the earth, would have caused life to become too frenzied; and with the moon go all those forces which would have brought about hardening and rigidity - everything that would have tended to make form final. The earth remains in the middle, as it were between the two. This is why man on earth is influenced in his actions alternately by moon-forces and by sun-forces.

How are we able to know this happened? Steiner gives this explanation of the law of repetition:

[page 34] But from ancient times there remains with man something that is like a remembrance of the spiritual worlds, and, in accordance with the law of repetition, everything he had experienced in life woke up within him later as knowledge.

What are these beings that Steiner refers to above, and what could cause them to want to help humans in their evolution? The beings are variously the angels, the archangels, and the archai. As for the second part of the question, consider that, if you have a pet, that you probably feed, nourish, care for, and tend to the well-being of your pet. And what do you get in return? Love - in exchange for your attention, you receive love back from your pet, and call that a good deal. Thus it is with us and angels. Angels assist humans in many ways and are nourished by the love that we give in return. As I wrote in the margins of page 47 where Steiner explains this process:

In the animal kingdom we see our "degenerated descendants" according to Steiner on page 95. There is a wisdom in the old phrase, "Well, I'll be a monkey's uncle." that turns the theory of Charles Darwin upside down. We do not have uncles that were monkeys, but rather we are the uncles of monkeys that have descended from humans in the distant past. This is not an easy notion for a materialistic evolutionist to accept, up until now.

In the process of evolution humankind developed the very first sense organ to experience warmth, the pineal gland. This early organ emitted rays as a lantern and enabled humans to experience warmth in the vicinity as well as at a distance. The next organ to develop was the pituitary gland, which "regulated the lower forms of nutrition and respiration while they were still combined."

In the coming of Christ there was a breaking up of the bonds of the group-soul, the blood ties of family groups. Only when one transcends one's blood-ties is it possible for love to be offered freely from one human being to another. In Matthew X, 37, 38, Jesus Christ is quoted as making this very point thus:

In the early days of European culture, Steiner points out, the people possessed remnants of an old clairvoyance and were thus in close communion with the gods after death. Over time, as humans fell further into the physical aspects of reality, the gods seemed to lose their hold over the earth. This phenomenon is referred to as Götterdämmerung or the Twilight of the Gods.

It was only through the appearance of Christ in a human body that humankind's fall into the material world could be reversed. Here's how Steiner describes what happened:

[page 148, 149] The Christ Principle could not assume a human body which had entered deeply into the physical plane. For that something else was needed. Even a being such as Jesus of Nazareth, who had lived through many incarnations and had reached a high stage of development and initiation - even he was not capable at birth of being the bearer of the Christ. But after preparing himself over a period of thirty years he had succeeded in purifying the outward human sheaths - the physical, etheric and astral bodies - to such an extent that the individuality of Jesus of Nazareth could leave the purified bodies in the thirtieth year of his life. This abandonment of the outer sheaths is indicated in the Gospels by the Baptism by John in the Jordan. This was where a change of individuality took place, where the Christ-individuality took possession, not of an ordinary human body, but of a body purified for thirty years.

[page 149] On that occasion something flashed through the whole body of Jesus of Nazareth reaching even into those parts which, at the present stage of human evolution, are the most withdrawn from the influence of man - namely the bone.

[page 150] Hence no external physical force was permitted to interfere with the bone-structure of Jesus Christ "No bone of his shall be broken."

[page 150] It was the Sun Spirit, who through this withdrawal from the earth had made it possible for mankind to enter into physical matter and thus become ossified. He acted now so as to provide mankind with the impulse through which this ossification could be annulled, spiritualized.

Thus it came to be that the same Sun Spirit that had withdrawn to allow humankind to descend deeply into the physical world, returned to the earth in the body of Jesus of Nazareth to help us once more begin our ascent back into the spiritual world.


To Obtain your own Copy of this Reviewed Book or Check if available, Click on SteinerBooks Logo below.