Site Map is NOT the Territory: MAIN / A Reader's Treasury / Webpage  Printer Ready 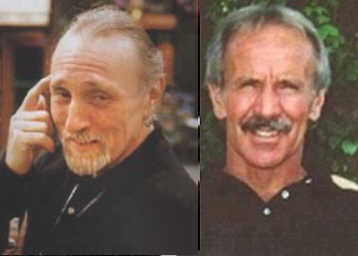 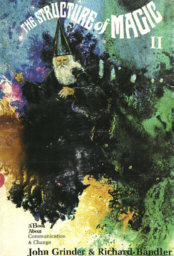 The Structure of Magic, Vol. II
A Book about Communication & Change
Chapter: Psychotherapy
by
Richard Bandler and John Grinder

In Magic I we learned that maps differ from the terrain they represent, and that, if we trust a map which is in error, we may, if we're in Norway, for example, find ourselves falling headfirst into the icy waters of a fjord. Or if we're simply living our everyday life and we trust our representational systems, those systems of enchantment we received from our caregivers, we find ourselves instead in hot water.

[page 3] These maps, or representational systems, necessarily differ from the territory that they model by the three universal processes of human modeling: Generalization, Deletion, and Distortion. When people come to us in therapy expressing pain and dissatisfaction, the limitations which they experience are, typically, in their representation of the world and not in the world itself.

Bandler and Grinder expanded the term representational system to include the "five recognized senses for making contact with the world" â€” seeing, hearing, feeling, tasting, and smelling. In addition we language words with which to describe the world which correspond to each of those five senses. We can see a pot boiling on a stove, hear the bubbling of its contents, feel the heat emitted by the fire under the pot, smell the cooking ingredients, and eventually taste the gumbo in the pot. Someone who has never cooked nor eaten an okra gumbo before would likely only describe what it looks like, a bunch green hexagons with seeds rolling around in the liquid. Someone who loved gumbo might talk about how good it tastes and how warm it makes one feel when it goes down. How the filé when sprinkled on top gives it an aroma redolent of the bayous and swamps of his youth. This is straight forward representation: you describe taste as a taste, smell as a smell, visual information using visual words, feelings as feelings. But one would be off-base to assume that everyone uses words in the same straightforward manner as you do.

[page 8, 9] This is not true in all cases. The representational systems that are highly valued and highly developed in each of us will differ, either slightly or dramatically. Many people can make only vague pictures and some, no pictures at all. Some people must try for an extended period of time before they are capable of making a vivid image, and some can create a vivid image almost instantly. This wide variation in the capability to create a visual representation is also true of all the other representational systems.

[page 11] Our students first go through a stage of not believing this; they begin to listen to people in this new way and become amazed at what they can learn about themselves and those around them; thirdly, they learn the value of this knowledge.

The value comes in many ways. One can engender trust in another person if one quickly incorporates the other's preferred rep system when first talking to them. If the person says, "I clearly don't know why I've come to you," you might offer back, "What it might it look like if you got everything you wanted from this session?" Moving one's rep system to match the other person's is a good way of establishing rapport or re-gaining it if one loses it. Once rapport is established, one might decide to get the other person to switch their representational system because the very blockage they've asked you to help them remove depends on its existence for their favored rep system. By moving the person to another rep system, the blockage will seem to dissolve away.

Another technique is to simply add another rep system of some experience. If the current experience is expressed in auditory terms, help the client to build a way of representing the same experience in a visual rep system. If the person says, "I don't like what I'm hearing from my boss at work," you might say, "Does he have a smile on his face when he sees you in the morning?" This requires the person to access a visual image and he may receive information that indicates his boss really likes him, but not the situation he has been forced to place his employee in. Expanding a person's primary rep system is a great way of removing distortion caused by using a single rep system, up until now.

Once we mastered understanding and recognizing rep systems, the next step is to notice incongruities. These occur when the message communicated in one rep system does not match the message delivered in some other rep system. Examples: we recognize sarcasm when a person says, "Yeah! I'm real happy!" while his tone of voice indicates he's really unhappy. The auditory content says happy and the auditory tone says unhappy.

[page 46] The term incongruent, then, applies to a situation in which the person communicating is presenting a set of messages carried by his output channels which do not match, are not compatible â€” this person is said to be incongruent.

Part II describes how to deal with clients who are incongruent. One method is that you move a client who is simultaneously giving incompatible messages in two different rep system to becoming serially incongruent, perhaps saying "I'm mad!" with the unhappy tone of voice, and "I'm happy" with a happy tone of voice.

Part III describes the familiar Fuzzy Functions, such as "You make me mad," an invalid cause-effect relationship. Another one is the process of mind-reading, which involves many kinds of subtlety, but in its most direct form amounts to saying, "I know what you're thinking."

Part IV deals with that "delicate flower" The Family System. It requires all the tools described in detail in both Magic I and Magic II, but administered with the finesse required to maintain the family system.

[page 129] The sensitivity which the therapist shows in selecting the particular Cause-Effect relations with which he will deal explicitly is much of the art of fast, effective family therapy.

Whether your job is striving to helps others improve their lives or to improve your own, the study of rep systems, incongruities, fuzzy functions, and family therapy will provide useful guideposts through the complicated mazes of real life. The real magic of life is how people manage to find their way through these mazes with the help of others and on their own.