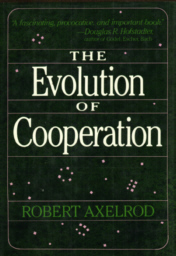 The Evolution of Cooperation

This is a ground-breaking book that begins with a simple premise, "When should a person cooperate?" In his Preface he not only asks when should a person cooperate, but when should a person not cooperate in an ongoing interaction with another. Axelrod takes off from these pointed questions, but not as Emerson or Aristotle might have, expostulating basic reasons why cooperation is morally better than not cooperating. Instead Axelrod asks for people to come up with simple algorithms or software programs that specify when cooperation is to occur in an interaction and when not. Not only that but he specifies the exact rules of the interaction, something he calls the Iterated Prisoner's Dilemma. And if that is not mind-boggling enough, he constructs a computer platform which allows the various submissions he receives from experts all over the world to play against each other to determine a winner!

Axelrod sent out invitations to 63 experts around the world and when their responses came in, he input them into his computer and allowed them to play against each other. Using the numerical grading system of the Prisoner's Dilemma from Game Theory, he was able to create an objective score which reflected the success of this otherwise abstract strategies when they worked against each other.

"And the Winner is . . ." Well, the winner was a five-line FORTRAN program submitted by Anatol Rapaport of the University of Toronto. By far the shortest program, it won hands down against all the other 62 submissions. Axelrod published the results to all participants so they could see the code of all the submitters and how each performed. He then invited them, plus about 200 other folks, to submit to a second round.

"And the Winner of the Second Round is . . ." Anatol Rapaport, who simply re-submitted the same five lines of code and won against all the other 255 or so participants. What was Rapaport's strategy that was so robust as to win against all comers? Simply this:

1. Cooperate on the first move.

You can read the rules for scoring the Prisoner's Dilemma in the book so I won't include them here. The key to determining a strategy is to decide when does one cooperate and when does one defect. The strategy submitted by Rapaport worked best of all the other strategies submitted. It's a simple strategy, one that small businessmen have used successfully over millennia: cooperate first, then defect if the other defects, but cooperate when the other cooperates again. It even has a common name, one that does not do the service it should to the strategy because the very name sounds vindictive, "Tit-for-Tat." Rather than being vindictive, which can describe the attitude of a person who once wronged never forgets, Tit-for-Tat forgets immediately upon one instance of cooperation. That kind of strategy might be derided as "short-sighted" by the sophisticated business leader of this new century. And that adjective could well be applied to the derision itself from now on. Given that this strategy survived all comers in the iterated Prisoner's Dilemma in two passes, it can hardly be short-sighted to follow the strategy in one's own life from now on.

When I first read the results of this seeding, I was astonished! Here in purely cybernetic fashion, Axelrod had proven a tenet of Dr. Andrew J. Galambos. Galambos claimed that "freedom, once built, could never be destroyed." He showed how this tenet grew out of his definitions of property, freedom and morality. Axelrod, without ever talking about property, freedom, or morality, showed that the tenet of Galambos was not only true, but demonstrably provable.

Let me stop to explain how freedom and cooperation are two words for the same thing, rightly understood, or the above paragraph will not make any sense at all. I write enough paragraphs that don't make sense by accident that I refuse to do so on purpose. In short, Galambos teaches that freedom is not something that can be fought for. When you rebel, you get more of what you resist. Looking back to the War for American freedom in 1776, we see with the hindsight of 225 years that we have re-created an on-shore tyranny and taxation that far exceeds the off-shore tyranny we fought against.

How does one build freedom? By understanding that freedom involves volition without outside constraints. That sounds foolhardy, I admit, but hang with me. Property must be understood as "one's life and all non-procreative derivatives of one's life." If you accept that definition of Galambos, then consider his definition of freedom as, "the societal condition in which every one has complete control over one's property." One more short step, so stay with me: equate "freedom" with "cooperation".

I can hear some of you saying, "We have laws that require people don't use others' property without permission." Yes, we do, but for the most part those laws only apply to things, or what Galambos calls "secondary property." Primordial property is one's life, everything within one's skin. Do we not have laws (e. g., capital punishment) that take people's primordial property without permission? Primary property is one's thoughts and ideas. Does not copyright law protect one's ideas? Nope, only a particular incarnation of an idea, not the idea itself. Does not patent law protect original ideas? Well, to file a patent requires lascivious disclosure of the idea, and if you're as fortunate as the two guys who invented the airplane or the man who invented FM radio, you'll die before you find effective enforcement of an idea via the Patent Office and the USA court system. Yes, the patent system provides partial protection for ideas, but it does so in a way that encourages "defectors" to use others' ideas without permission.

A simple way to describe all this is to say that in the USA we have a system that provides partial protection for secondary property and some small areas of protection for primary and primordial property. In exchange for this protection, we must endure "defectors" at every turn that live off of takings of other people's property, and do so legally. We have a huge bureaucracy in the IRS that devotes itself to taking others' property without their permission. Sure, you say you volunteer to support your services with your tax money, but don't kid yourself, if you were to decide the opposite, some armed SWAT team would show up at your door and they won't knock before they enter. Imminent Domain is another name for taking property without permission. More insidious and more devastating in its impact is the taking of property by preventing a person from using the property by a federal edict, which happens every day. We outlawed quartering of soldiers without permission, but now we have quartering of federal agents without permission. If you don't believe it, try to build on a piece of property you own that has been declared to be a "wetland." They'll show up soon enough to show you "who's boss." When you cooperate, individuals are their own boss, when you defect, you use someone else's property without their permission and you become their boss.

How do you build freedom? One person at a time.

One person at a time decides not to defect. They make a decision to use only their own property [primordial, primary, and secondary] and ask permission before attempting to use someone else's. If they do so unwittingly, they make restitution.

By now you may be able to see how building freedom is similar to Axelrod's seeding of cooperators into an environment of defectors. Cooperators operate with each other in freedom and when they encounter a defector, they defect on the next move. Ayn Rand came close to suggesting this process in Atlas Shrugged. John Galt had invented an engine that would revolutionize the world, but rather than have the defectors take it from him, he removed himself to an environment of all cooperators. Given the cybernetic proof provided by Axelrod, we can now safely claim that it is not necessary for one to run off to some secluded area in Colorado with a gang of cooperators to build freedom. It can be done right where you are, with the people you interact with on a daily basis.

This is an amazing book, full of amazing insights. A small review cannot do it justice. Read it for yourself and see if you cannot find freedom within.