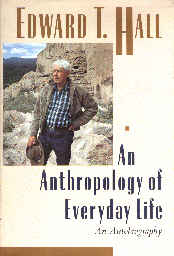 An Anthropology of Everyday Life by Edward T. Hall
An Autobiography
Published by Doubleday in 1992
A Book Review by Bobby Matherne ©2002


This is not the story of an anthropologist looking at everyday life, but the story of a man who became an anthropologist after many years of looking at patterns in his everyday life. He claims to have noticed that he was more interested in the digging crews when he was working as an archaeologist than the digging, and soon switched to cultural anthropology. His first book, The Silent Language deeply affected me when I first read it in the 1960's — his cogent explanations of the patterns of metacommunication that transcended verbal language opened a door to a new reality for me — one that is as exciting today as it was then.

In his childhood in New Mexico he studied impressionist painting and soon learned that "every part of a painting affects every other part." The adding of a dab of color to a painting can change the color of the dab and all the other colors already on the painting. It was a metaphor for what happened when he was later assigned to build earthen dams with the Hopi and Navajo tribes. This dab of white skin on a field of red skins were both changed by his presence.

On a trip to Europe to visit his mother he noted how the German trains ran tightly and smoothly on the track and were always right on time. The French trains, however, swayed from side to side and ran late. He was far more observant about the hidden cultures of the continent than the French who confiscated German trains after World War II only to find them useless on the French tracks.

In Truman's Point IV program he trained staff at the Foreign Service Institute in communicating with the natives in the many foreign cultures they were being shipped out to. Much more than verbal language, he taught them to speak the "silent language" of the hidden culture, without knowledge of which, their carefully laid plans would be ineffective. Being successful in a pioneering field is a hazard fraught with dangers today in America and was even more so in the fifties. All the FSI anthropologists were fired at one time in response to the McCarthy hearings and they were replaced with bureaucrats who taught the staff standard, culturally accepted language skills.

He quotes his friend David Rioch several time, and one of the best is, " What you see is what you intend to do about it." This was his comment on the biases inherent in our perceptive apparatus.

I am glad that Ned took the time to write about his life before it becomes so fast that he "reach(es) a velocity sufficient to overcome the pull of the earth and fly off into the unknown." With Ned there, however, it won't stay unknown for long.