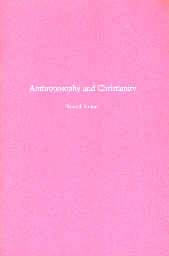 Anthroposophy and Christianity
by
Rudolf Steiner
Lecture in Norrköping, Sweden on July 13, 1914
Published by Anthroposophic Press, Inc. in 1985
Book Review by Bobby Matherne ©2002

This book is as brief as it is powerful. First Steiner urges that persons approach spiritual science without prejudices. He points out that "Natural scientists, too, had to face prejudices hundreds and even thousands of years old. But truth possesses powers which always help it to victory against any hostile forces." After arguing that one trained in natural science should be easily able to accept the premise of his spiritual science, a point I heartily agree with, Steiner says, "The premise of spiritual science is that in becoming an instrument of investigation into the spiritual world, man has to undergo a transformation . . ." Thus Steiner pulls the rug from under the scientific skeptic who cries, "Where is the repeatability of your science, the oscilloscope that will measure your phenomena?" I can visualize Steiner pointing to the skeptic and saying, "The answer is within you. By your transformation you can become the instrument of your own conviction, and by no other way." "But, but," the skeptic responds, "you are talking about visions, hallucinations, or other pathological conditions of the weak-minded and infirm." "No way," Steiner would shoot back. Here's his exact words:

[page 9] For the spiritual researcher learns to distinguish exactly from what memory can summon up and something radically different from the content of memory . . . The less a person tends in that direction [ed. note: visions, hallucinations, or other pathological conditions], which is mere reflections of ordinary experience, the more safely he advances in the field of spiritual research.

Basically Steiner is saying that man is the instrument and the objections raised by the skeptic treats all spiritual researchers not as perfect instruments but as though they were faulty instruments, up until now. Another faulty measurement by the skeptic is that spiritual researchers are trying to found a new religion. Nothing could be further from the truth. "Mankind has matured; the time for prophets and founding religions is over," Steiner says bluntly. The attitude he takes is, in his words, "I've discovered it; you can discover it, too, if you try." Sounds like the attitude of an authentic scientific researcher to me.

After providing a scientific basis for anthroposophy, Steiner moves to what he calls the "pivotal event in man's evolutionary history, the Christ Event." He points out that both St. Augustine and Plato said that there existed a Christian mode of thought many years before Christ died on Golgotha. That mode was taught by the process of initiation in the ancient mystery schools. Steiner makes the bold statement that justifies his reference to "pivotal event":

What the mysteries once introduced to human souls, dwell, since the Mystery of Golgotha, in every human soul, shared by all alike.

Thus is it ever so: we oppose, when we misunderstand, what, if we understood, we would love with all our hearts. The skeptic of today is so much like Criminino in Bruno's day, who refused to look through Bruno's instrument, his telescope, at the mountains on the moon, because Criminino said, "There can be no mountains on the moon." Steiner said,

Giordano Bruno pointed beyond the supposed limits of space to endless worlds embedded in its vast expanses, the spiritual scientist must similarly explain that behind the supposed boundaries of birth and death there stretches never-ending time, in which the eternity of the human soul, the eternal being of man as it passes from life to life, is embedded.

Look through the telescope you skeptics of spiritual science. The instrument is before you, in fact, it is within you, and no other instrument will suffice.