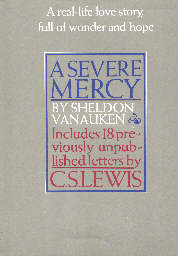 A Severe Mercy
by
Sheldon Vanauken

We have loved the stars too fondly to be fearful of the night.
(author unknown)

In this autobiographical novel, the author Van meets Davy and the love story begins. Their love for each other is soon transcended by the love of God in their conversion to Christianity. They begin study groups while at Oxford to discuss various aspects of their new-found faith and he begins a correspondence with C. S. Lewis about Christianity. (Lewis was instrumental in their conversion.)

The story starts with flashbacks triggered during a visit to Glenmerle, his beloved childhood home. (Glenmerle means 'valley of the blackbirds' I think.) As he sees each part of the estate from his MG TD, he remembers for the reader his meeting Davy and their long picnics and talks around the swimming pool.

I believe that genuine inloveness is rather less common than the romantic novelists suggest. One who has never been in love might mistake either infatuation or a mixture of affection and sexual attraction for being in love. But when the 'real thing' happens, there is no doubt. A man in the jungle at night, as someone said, may suppose a hyena's growl to be a lion's; but when he hears the lion's growl, he knows damn' well it's a lion. So with the genuine inloveness. So with Davy and me. A sudden glory.

In Davy's conversion to Christianity comes the first cleft in their monolithic bonds of love — she begins to go to church without him and to devote her spare time to reading the bible. Van goes occasionally to church and reads the bible even less, so he is forced to spend more time alone.

They move to Virginia and begin long moonlight drives into the Blue Ridge Mountains in the TD. Often they stop at a small church in the mountains to worship and pray. Davy becomes ill with a rare disease and the prognosis is death within a year, ending with her in a coma. Through her illness they are brought close together once again as they were back in their Oxford days.

The letters from C. S. Lewis are a special treasure. They clearly show the letter writing skills of Lewis and his commitment to Christianity. The book title comes from a reference to Davy's death in one of his letters.

The novel deals with the issues of friendship in love and love in marriage: of Christianity in friendship and love, and of the pain of suffering and separation. Like the lord of her new religion, Davy is crucified and through her painful death, those close to her experience redemption through "a severe mercy."