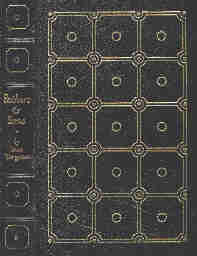 A READER'S JOURNAL, Vol. 1
:
Fathers and Sons
by
Ivan Turgenev
Published by Easton Press in 1988

First book by Ivan Turgenev that I've read. As the prefatory notes in the Easton Press edition point out, this is a short book as Russian novels go -- only 250 pages. The stars are Arkady Nicholeivich and Yvegeny Vassilyitch (Bazarov). Arkady and Bazarov have just graduated college and returned to their families (and fathers). First we encounter Arkady's father, retired from the Russian army. During their visit Bazarov spent all his time studying nature by collecting and dissecting frogs. Next they visited Bazarov's mother and father. We see his father through Bazarov's eyes. From there they visited a lady's estate and became enchanted by her and her niece. Bazarov's profession of love for the lady was rebuffed, and his life began sinking irretrievably. Up until then he had been careful and aloof as befitted the super-nihilist of the time. Arkady admired him greatly as a nihilist. When Arkady was intrigued by some new topic, he would be non-plussed when Bazarov would invariably brush it off as meaningless.

Arkady stayed with Katie, the niece, and fell in love. Bazarov visited Arkady's house and got caught by Pavel (Arkady's uncle) kissing Arkady's father's live-in woman. Pavel challenged him to a duel in which Pavel was shot in the thigh. Bazarov returned to his father and helped him in his medical practice. Bazarov contracted typhus during a post mortem and died a lingering death. In death so as in life - Bazarov died a meaningless death just as he lived a life that he had devoted to the creed of meaninglessness.

There was only one meaning that he found: after meeting his love, he went from dissecting frogs to dissecting humans. For Bazarov this was a quantum leap in understanding and meaning. A leap that led to his death, unable as he was to dissect the meanings of live humans, he died from dissecting a dead one. If he had been able to deal with the live one (Lady O.), he would have thrived just as surely as he died from dealing with the dead one. Arkady was able to deal with his live ones and did thrive, moving away from nihilism at the same time as his friend, Bazarov, disappeared into it.