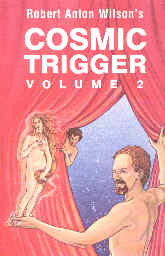 Raised by nuns, this good Catholic boy was born on Cary Grant's twenty-eighth birthday. Since Saturn returns to its spot in the Zodiac every twenty-eight years, astrologers' eyes always twinkle when Wilson mentions this. In some societies, a person having his twenty-eighth birthday sells all his possesions and undergoes a symbolic death and rebirth. One day he took a walk on the Brooklyn Bridge to jump to his death, but instead decided to "go along for the ride," and he committed himself to increasing the probability of Utopia and decreasing that of Oblivion. In that spirit he pulls Cosmic Trigger II on us, a similar spirit with which he pulled the original Cosmic Trigger on us almost twenty years ago.

This latest Cosmic Trigger unleashes a series of stories including a brief autobiography, all of which are interwoven into short two and three page chapters that cycle back and forth between the various story lines. The reader never knows until sometimes halfway into the story exactly which story line it is, and after a while it makes no difference which story is being embellished and continued.

Whether it's Wilson in the RAW, the dead Kerry baby court case, quantum physics, or the progression of information doublings, the author pulls us through the book with marionette strings attached to each of the threaded stories. With the insight, wit, and charm of his astrological soul mate, Cary Grant, Wilson dashes words on the page like a cub reporter at a plane crash. The deadline is too important for careful exposition and all the facts must be included. His abundant use of boldface, uppercase, and italics makes the book resemble a typographer's workbook, but the wit and charm hypnotize the reader into ignoring the unorthodox typography.

Cosmic Trigger II is not a sequel and stands on its own. It adds completely new material that chronicles the life and thoughts of the past twenty years of Robert Anton Wilson that have brought all of us closer to Utopia and farther from Oblivion.