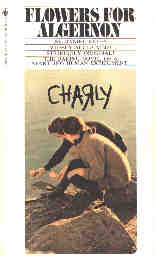 A READER'S JOURNAL, Volume 1
:
Flowers for Algernon
by
Daniel Keyes
The Daring Novel of a Startling Human Experiment!
Published by Bantam Books in 1984

This novel is told in the form of progress reports by Charly Gordon, a retarded kid who always wanted to get smart. When the book begins, Charly is in his mid-thirties and has been working as a laborer for Mr. Donner's Bakery for fifteen years. During that time he was subjected to all forms of taunting and humiliation by the three guys he called his good friends.

One night Charly got up the courage to attend a night school class to learn to read and write so he could understand what was going on in those balloons above Batman and Robin's heads in his favorite comic books. The teacher, Alice, took him to a testing program at the university psychology department to see if they could help him. They tested him with raw shark (Rohrshach) tests, where his only response was "Somebody spilled ink on those cards." They placed him in competition with a white mouse to see who could finish a maze faster, and the mouse, named Algernon, won every time. The researchers asked Charly to begin writing in a diary at this time and this began Charly's progress reports which comprise the entirety of the book.

The technique of having the progress reports form the entire text of the book places the reader in an intimate first person relationship with Charly as he undergoes various changes. The researchers operate on Charly's brain, and after his brain operation, Charly walks around asking people if he's smart yet. Gradually the misspellings begin to disappear and the punctuation appears in Charly's reports. His prose grows from barely literate to polished academic prose as his intelligence increases. Soon Charley is making everyone, including college professors, nervous with his knowledge of foreign languages and other esoteric studies.

In the middle of the book Charly begins to discover women, in particular Alice, his former teacher, and Fay, his next door neighbor. Fay is an artist who works semi-nude and is soon dropping in on Charly unexpectedly. As the newly intelligent Charly copes with boy-girl issues for the first time, the archaic Charly inside of him takes a position at the window or across the room and makes it difficult for progress in the sexual arena. Finally Fay breaks through one night with a bottle of gin.

As Charly gets smarter, he begins his own research project with his old friend, the mouse Algernon, and discovers some troubling aspects of the surgery that he and Algernon both had: it is only temporary. He writes up a scholarly report, has it published in an international journal, and then begins his sad journey back into his original retarded condition, but first visiting his mother so she could see her dream realized: her retarded son turned into an intellectual genius.

As the end nears, the progress reports from Charly begin to deteriorate, he eventually returns to Mr. Donner's Bakery for a time, and finally to the Warren Home School for the Retarded. In his last progress report Charly asks, "please if you get a chanse put some flowrs on Algernons grave in the bak yard."