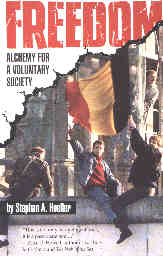 A READER'S JOURNAL, Volume 1
:
Freedom by Stephan A. Hoeller
Freedom - Alchemy for a Voluntary Society
Published by Quest Books in 1992
Book Review by Bobby Matherne ©2002

This Hungarian brings his freedom fighting ways to the United States and says he sees, "freedom waning in the land of the free." In this book he diagnoses the illness and writes out a prescription for its cure. The illness is identified as creeping Marxism, and the medicine to cure it is "voluntarism."

His background as a Jungian therapist and apologist well suits him to discuss the need for individuation as the key to the breaking up of the mass-hysteria with which Marxism grips and stultifies the intellectual elite of this country. He points out (like Jung) that "any large company composed of wholly admirable persons has the morality and intelligence of an unwieldy, stupid, and violent animal." That seems to be true of this entire country and is the most serious indictment that can be made for democracy, or rule by the masses. The masses cannot advance without some extension of consciousness among one or more of its individuals, the solitary soul cutting a new path through the wilderness of mass unconsciousness. A new discrimination, a new orientation, a new individuation, and society as a whole reaps the ultimate benefits.

Hoeller is not talking about individuals who "fancy themselves wise, insightful and farseeing, [and who] naturally believe that they know what is best for everyone." These are the modern day folks who have appropriated the name "liberals" for their purposes of foisting their wisdom on everyone and making myriads of people unhappy and miserable in the process. These are the people that make things malfunction by their earnest efforts to "push the river" into some well-worn, but abandoned, riverbed.

Let us, like Parsifal, turn to our wounded fisher king, and ask, "What ails thee, Uncle Sam?" If we ask the right question, we may become healers of this kingdom like Parsifal. In the cup of the Holy Grail we will find the sacred waters of individualism, and we will quaff it with joy for our liberation.