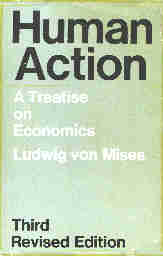 Reviewing Human Action is like reviewing the Bible. How do you describe the book in just a few words on paper? For me the process of reading it bridged a five-year period during which I got halfway through the book in fits and starts, waited a year or so, read a couple hundred pages, set it aside, and so on.

Like the Bible the important part of the book is the effect it had on me. Each argument that has ever been proffered in favor of socialism and interventionistic policies of any kind, von Mises attacks, surgically removes its heart, eats it with relish, and moves on to the next course of his capitalistic feast. Von Mises' human action in this book is devoted to explaining how the interventionist policies of government are creating the very problems they are attempting to overcome. No sacred cows are bypassed by this monomaniac of economic freedom. Von Mises attacks everyone equally: the farmer who wants price supports, the laborer who wants minimum wages, the industrialist who wants his goods protected by a tariff; they are all rendered into the public tub of lard he calls socialism. And he allows no one to pretend that a little socialism is good - in the long run. In the short run he admits that the favored sector benefits from the skewing of public policy in its favor, but he hastens to show how even those who benefitted from the interventions lose in the long run.

This is the only book on economics one needs to answer any and all the questions on how to proceed with tariffs, import duties, Japan, Germany, Russia, Poland, bank failures, interest rates, inflation, depressions, recessions, taxes and a myriad of other difficulties in government.

That the book, Human Action, was written in 1949 only enhances the value of the timeless advice von Mises gives on economic matters. Pick it up and open to any page and the words there will seem to have been written just yesterday.

Bypass this book at your own peril.