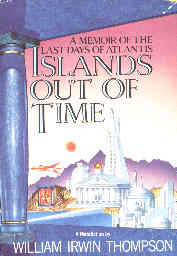 A READER'S JOURNAL, Volume 1
:
Islands Out of Time
by
William Irwin Thompson
A Memoir of the Last Days of Atlantis
Published by Dial Press/Doubleday in 1985
Book Review by Bobby Matherne ©2002

Picked this novel out of the pile in the back seat of my car while waiting for a tow truck to pick up my car. I had started it four years earlier and had quit after 30 pages. Having been impressed by his Darkness and Scattered Light and other Thompson non-fiction books, I expected a treat. Four years later the treat came. I had just finished reading Owen Barfield and Rudolf Steiner books in which the phrase "post-Atlantean epoch" came up several times. This metafiction (as Thompson calls it) deals with the last days of Atlantis and that was ample reason for me to give it another try.

Seems like the City of Knowledge has a pyramid that was soon to be raised in height. The chief poet and music composer, Virococha, predicted a catastrophe would ensue when the solar crystal at the top of the pyramid was activated. When he expressed his theory publicly he was promptly sent on vacation for a month. A virgin from distant islands, Brigita, ensnared him and took him home with her to what promised to be a sexless rest and recuperation stint due to her sworn abstinence from sex. She knew him intimately already from her dreams, but would have nothing to do with him in the physical body. He didn't remember any of those dreams and wanted to ravish her physical body. She told him that he had been selected to be leader of the movement to free people from the tortures of the High Priest.

Vacation over, he returned to the City and was given a tour of the High Priests experiments with young boys and pregnant women, which turned his stomach. Whether the experiments to concentrate etheric bodies succeeded or not, the participants were treated to a long slide down to the sea for disposal.

Was Brigita a witch or a savior? Was Viracocha to be the new leader? Would Atlantis sink beneath the sea? Only the last question can be answered with assurance before the climax of the book.