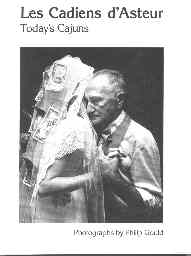 The "Acadians of Today" is a delightful potpourri for the eyes and ears. If you know even a little Cajun French, try reading the Cajun text first. Some of text is English, most is French, some of the translations are side-by-side, some are in the appendix. The pictures and stories began resonating with a deep part of me, each photo, each vignette, like a bass violinist plucking a string fashioned from my very flesh. Though I've never been to a Cajun horse race nor chased chickens on Mardi Gras, even those activities felt like a natural part of my past. What a joy to read an authentic Cajun as he tells you how to make a gumbo. "Season it as you want," he says. That's what we Cajuns did with all we found when we were cast out of our chains on the shores of Louisiana. We had been uprooted from our native land in Acadia like slaves and shipped overseas in chains. Not to waiting employers and caretakers like slaves from Africa, but to empty land and poverty. Empty, but filled with food on the land, in the water, and in the air. Surviving on indigenous plants, seafood, and wildfowl, my ancestors forged a life for themselves, complete with its own unique culture. And in the twentieth century, they prospered on a new natural bounty under their land and water: oil. Over 200 years they maintained their native language, weaving in American words where convenient, until they now speak a French dialect whose basic structure has not changed from that of the Brittany potato farmers of the seventeenth century.

Nowhere in this book were my heartstrings more poignantly plucked than by the story on page 126 about the Cajun grandmother who would like to speak to her beloved grandchildren. But she can only speak Cajun French and they can only speak English. She tells how her daughter, Emma, was slapped one day by an American schoolteacher who came from North Louisiana. She had told the class to write something, and Emma, who knew no English, tried to find out from her cousin what was expected. Her father, Sosthene, lost a day's work in the fields to go to school to tell that teacher she'd better never lay a hand on Emma again or he'd make her paddle a pirogue full of holes and see how good she'd do that. When the grandchildren call on the phone, the Cajun grandmother uses her only English words to tell them, "Grammon's fine. An' y'all?"