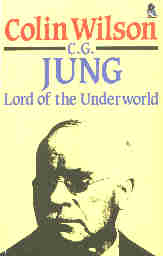 A READER'S JOURNAL, Volume 1
:
C. G. Jung - Lord of the Underworld
by
Colin Wilson
Published by The Aquarian Press in 1984
Book Review by Bobby Matherne ©2002

This book gives a comprehensive overview of Jung's works in the context of his life in a highly readable form. Colin Wilson's background in the occult shows up in his descriptions of everybody's favorite Jung anecdotes: the sharp noise from the cupboard in Freud's presence, the scarab beetle that knocks on the window, and Jung's last words, "Let's have a really good red wine tonight."

Underlying the generous treatment of Jung's life and works is an undercurrent of animosity that began appearing as superfluous adjectives and adverbs such as "Jung's incorrigible tendency towards myth-making" and "Jung's abnormally active unconscious." The presence of these negative modifiers indicates that Wilson has an axe to grind and as they began to appear about once every page or so in the second half of the book I became curious as to what his issue with Jung might be. Also I became concerned that he might finish the book without explaining his area of disagreement. Not to worry - he devotes chapter 7 to his "Doubts and Reservations." In a nutshell he claims: Hudson did it first and Janet did it better. He goes through a litany of Jung's failures and explains how Janet's method would have provided success. Even one of Jung's successes is slammed as a failure because Jung's explanation was "totally irrelevant" - Janet would have done it better and Wilson explains how exactly.

This is a heady brew for Jungians and not likely to endear them to Colin Wilson. Since they are the most likely readers of the book one wonders at what motivated Wilson to devote the time to research and write about the life of a man so that he could devote a chapter to tearing him apart. One clue appears near the end of the book when he takes Jung to task for not telling us what individuation really is. Undaunted he proceeds to tell us in a triumph of reason and logic. Now we know. What we know is that Wilson's view of individuation is very shallow compared to Jung's.

Read "C.G. Jung - Lord of the Underworld" by Colin Wilson -- Lord of Projections -- and you may come to prefer the "deep obscurity" of Jung to the "shallow clarity" of Wilson. To paraphrase the last sentence of Chapter 5: "The safest judgment on Wilson's biographical work is that they tell us a great deal about Wilson and his basic ideas; how much they tell us about Jung must remain an open question."