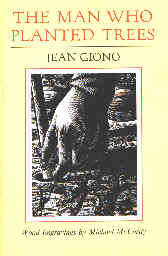 This delightful book was written by "The Man Who Planted Words," Jean Giono. On the barren slopes of Provence, the old Roman province in France with the California weather, the narrator encounters a shepherd and stays overnight with him. The next day he notices that the watersoaked acorns the shepherd had so carefully culled the previous evening are intended as seeds for oak trees. Invited by the shepherd, he accompanies him on his rounds for the day, which consist of punching a hole in the ground with his iron staff, placing an acorn in the hole, and covering it with dirt. As they plant trees, the old man (in his 50's in the 1910 setting of the start of the story) explains that he has planted over 100,00 acorns so far and expects 10,000 oaks to grow from them. He shows us his fenced-in plot of birch seedlings that he has planned for the river bottoms where ancients streams once ran.

The narrator returns after the war of 1917 and finds a great young forest covering the previously barren hills and the shepherd, untouched by war, still planting trees. After the second war in 1939, the narrator returns to find brooks flowing over dried out traces, new homes and hearty young people in a bustling village where only three hermits had lived before. The forest rangers attribute the formation of the new forest on barren lands to "a natural caprice of the earth." That would be exactly to the point if we remember to include man as "a natural caprice of the earth." Long referred to as "the most dangerous animal," it is time to remember that man is "the most caring animal." The shepherd lived in the future that included trees, forests, and brooks and working his way backwards to the present began planting the seeds to create the future he envisioned. "Uncaring" is a feature of man's animal nature whereas "caring" is a byproduct of his highest human capability: the ability to "see things that never were and ask why not," in Bobby Kennedy's words.

The novel is a wordless one and reads as a meditation just as the wordless hours the narrator spent with the "Johnny Oakseed" shepherd. One wants the book to be real, more than fiction, and through Giono's words huge reforestation projects have, in fact, sprung into being where only barren land lay before.