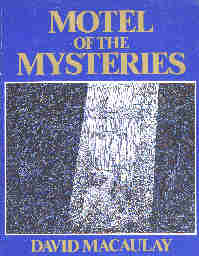 
In the 40th century the North American continent is covered with 200 feet of detritus from "pollutans literatus" and "pollutans gravitas" (junk mail and air pollution). The St. Louis Gateway Arch is useful for kissing for luck under the arch (now three feet above the ground) and the penthouse levels of the Bigapple extend like new Stonehenge monoliths from the ground.

Into this milieu enters Howard Carson who, like the Howard Carter of the early 20th century, stumbles into an archaeological funerary site and opens the door into ... "wonderful things."

Each part of the "Toot'NC'mon" Motel is catalogued and fitted carefully into Carter's map of the site as a tomb and funeral repository. Even the Hot and Cold water initials on the "water trumpets" are taken by Carter as meaningful, namely, as his initials. The shrine, "carved out of a single piece of porcelain" is used to pray to their gods in song. The famous (because it appears on a paper ribbon sealing the shrine) chant is worked out phonetically by Carter to be "Sanitized Before Using" .

The altar is a TV set on a dresser - the drawers are for depositing offerings for the gods, Carter postulates.

The drawings of the book and the author's sense of humor reminds me of Glenn Baxter. In 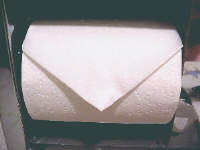 one full-page drawing, Carter is shown making shadow pictures of a rabbit with his hand on the "tomb wall."

By the time I was nearing the end of Motel of the Mysteries I was wondering what the point of the book was, but in the last section, there it was: reproduced on a matched set of bookends was the Sacred Point!

A good book to place on the coffee table or to keep handy near your favorite sacred shrine.