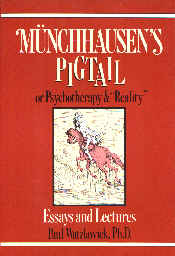 This book of essays and lectures necessarily plows familiar ground for avid readers of Paul Watzlawick's books like me. It was a delightful review for me, but for newcomers it will be a comprehensive introduction to the broad scope of the author's contributions to the field of psychotherapy and philosophy. Whether he writes about the practice of effective family systems therapy or the subtle nuances of the philosophy of constructivism, Watzlawick's inter-disciplinary approach infuses each field he delves into with insights from the other fields in a splendid cross-fertilization.

What is reality? "Real is", he writes on page 19, "after all, what is called real by a sufficiently large number of people." Then he relates a story he got from Gregory Bateson about some coastal inhabitants of New Guinea, about how they used heavy rocks, shaped like a millstone, for large business transactions and seashells for smaller daily ones. One day as a large millstone was being transported to effect a purchase, the boat capsized, and the rock sank irretrievably into the deep water. Since everyone knew what had happened, the rock continued to function as currency. In effect, it became like the US gold reserve in Fort Knox. The owner of the millstone could transfer title to the submerged stone and thereby use it for future purchases. The islanders had discovered that reality-by-agreement is the basis of all monetary systems that use paper currencies.

What happens if a problem occurs in some instances of reality-by-agreement? If there are no rules for changing the rules, the two parties to the agreement will caught in a "game-without-end". I remember playing tic-tac-toe as a child and enjoying it immensely. Then an older friend pointed out that whoever played first was assured a win or a tie, if they played carefully. That information took the fun out of the game for me. Suddenly there was a new game which involved determining who got to go first, and that game was not as much fun, so I stopped playing tic-tac-toe. Through the intervention of my friend, who was not caught up in the throes of our endless fun, I came to learn a new game and could no longer go on naively playing the old one. Santa Claus and the Easter Bunny are variations of that game, and thankless is the person who reveals the new and deeper game to a youngster.

This is an excellent metaphor for the process of family systems therapy, where the therapist acts as the older friend who teaches the family a new game which draws their interest away from the old "game-without-end".

One method therapists can use to break these "games-without-end" is called "symptom-prescription", which is the application of a "be-spontaneous paradox" to the limited patterns of interactions among family members. In effect, the family members are given a prescription to perform some behavior they had been previously performing spontaneously, which behavior comprises a key component of their symptomology. For example, a couple might be instructed to schedule a fight every evening at six. If they carefully follow their prescription, they will be likely not able to fight on command every evening, and will begin to find it more difficult to fight at other times. Their smoothly running albeit dysfunctional system of interactions, their "game-without-end" will be broken, and they can proceed to enjoy some new games in its place.

On page 95 is a story by Ross Ashby in which he is at a friend's house when as a car goes by, the friend's dog rushes to a corner and cringes there. The friend explains the strange behavior by saying, "He was run over by a car six months ago."

The car incident was unobservable to Ashby, but the dog's behavior was. We might say the dog has a memory of the car accident, but Ashby says that memory "is a concept that the observer invokes to fill in the gap caused when part of the system is unobservable." Like the sunken millstone of the islanders, like the eighteenth camel of the Sufi (See ARJ, The Dream of Reality), or the imaginary number i of mathematics, memory is an artifice used to bridge a gap and create a solution to an otherwise unsolvable problem.

On the cover of the book is a drawing of the central metaphor of this book. It shows Baron von Muenchhausen rescuing himself from a swollen stream by lifting himself and his horse into the air by pulling up on his pigtail. This is the bootstrap paradox and it demonstrates the recursive nature of self-reference. From page 188:

To postulate that the ego as subject should distinguish itself from the ego as object while at the same time remaining identical with itself is a logical contradiction.

And yet human capability is such that it can transcend logical contradictions. Consider the following sentence:

I don't see why I didn't see that before.

The first I is the ego as subject talking about the second I, which is the ego as object. Here is clearly a contradiction but such sentences crop up on a daily basis in real life. General Semantics resolves the paradox by telling us to apply a time index, a when, to the I 's:

This separation of ego into both subject and object is the basis for what I call Multiple Personality Organization (MPO), which in extreme cases may lead to the clinical diagnosis of Multiple Personality Disorder(MPD), where the individual ego selves do not know the other ego selves exist, and maintain separate lives entirely, sharing one body. MPO is the normal organization of that which is "disordered" in the MPD. With practice and attention to the sentences one says like the ones above, one can come to recognize the existence of one's individual MPO.

The client in therapy who declares "I would do anything if I could get rid of this problem" always stops short of (from page 204):

giving up the premises that are causing their suffering and the attempted solutions which flow so naturally from them but which in reality perpetuate their problem.

Unable to lift themselves out of their difficulty as deftly as Baron bon Muenchhausen, they may need an "older friend" to point out the limitations of their "game-without-end" so that they may learn thereby to play a different and more fun game from now on.