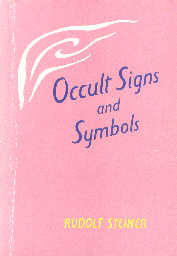 A READER'S JOURNAL, Volume 1
:
Occult Signs and Symbols
by
Rudolf Steiner
Four Lectures Given in Stuttgart in September, 1907
Published by Anthroposophic Press in 1972
Book Review by Bobby Matherne ©2002

Just as ice forms out of water, so does the physical body fashion itself out of the etheric. -- Rudolf Steiner

Steiner compares the etheric body to the ocean, with currents flowing in all directions. In the etheric body are five main currents that, when one stands with feet apart and arms outstretched, form a pentagram. Someone with super-sensible sight sees the pentagram as an anatomist sees a skeleton of bones.

During Atlantean times the atmosphere was overloaded with moisture and pervaded by a thick mist, so that outlines of the physical form were not perceivable, nor was the physical form fully developed as we know it today. What humans of that time saw when someone approached was the inner soul condition of the other, perceived clairvoyantly as a colored image that rose in the observer. At the time of the Flood, when the mist poured from the air to cover the continent of Atlantis with water, humans lost their clairvoyance and developed our current perception of the physical form.

What kind of form had the soul to experience when it escaped from the Atlantean watery landscape into the new airy landscape? For the present body to shape itself, the human being had to be surrounded by a form of definite length, breadth, and depth.

Steiner points out that the ratio of the dimensions of Noah's Ark as given by God in the Bible, exactly corresponds to the ratio of dimensions of the human physical form: 30:5:3 in length, width and depth. It was as though God were specifying the physical dimensions of the ark (our physical bodily form) that would carry the consciousness of humankind into the Post-Deluvian stage. Atlantis, a major civilization, existed on the dry floor of what we now call the Atlantic Ocean and was inundated by thousands of feet of water from the heavy mists that rained upon the earth.

Steiner describes for us the four animals that represent man at the four stages of spiritual being: earth, water, air, and fire. The snake is the symbol of the earth stage, the fish of the water stage, the butterfly of the present air stage, and the bee of the future fiery stage. "The bee is the symbol of the spiritual man who does not know mortality," Steiner says and talks of the whole group soul of the hive as mirroring man both in an earlier stage of evolution and a future stage.

As men in the future will be able to call people into being through their speaking, so it was that the forerunners of mankind, the gods, were gifted with an organ with which they expressed all things that are around us today.

Read a detailed review of Steiner's An Outline of Occult Science.