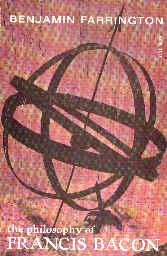 The Philosophy of Francis Bacon
by
Benjamin Farrington

And indeed it is this glory of discovery that is the true ornament of mankind.

Writing at a time (1620) when America had not yet been named (he called it New India), Francis Bacon brought his training as a lawyer to his study of natural philosophy and laid the foundations of the inductive method upon which future scientists would erect their lofty edifices of thought.

. . . let Aristotle be summoned to the bar, that worst of sophists stupefied by his own unprofitable subtlety, the cheap dupe of words.

Let Plato be next summoned to the bar, that mocking wit, that swelling poet, that deluded theologian.

Thus in turn he calls up and deflates the puffery of each philosopher, his animadversions verging on poesy.

You, Paracelsus, adopted son of the family of asses, owe him [Peter Severinus] a heavy debt. He took over your brayings and by the tuneful modulations and pleasant inflexions of his voice made sweet harmony of them, transforming your detestable falsehoods into delectable fables.

Bacon tells us that, what his precursor by 400 years, Roger Bacon, received from the Greeks was the childhood of science: "It has what is proper to boys. It is a great chatterbox and is too immature to breed."

Thus did Francis Bacon bring maturity to the philosophy of science by his experimental method and his famous inductive method. He required scientists after him to receive truth "from the light of nature, not recovered from the darkness of antiquity." To seek new insights from the present, not the past, was a dramatically new concept for the scientists of Bacon's day, and the payoff began with the discoveries of Newton, Leibnitz, and has continued until this day. It was Bacon himself who found comfort in the remark, "The blacker the past, the brighter the hope of the future."

"Not to try is a greater hazard than to fail. If we fail, it is the loss of a trifling effort. Not to try is to forgo the prospect of measureless good." Let us be thankful Francis Bacon tried.