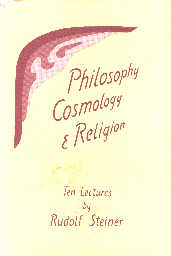 Philosophy, Cosmology, and Religion
by
Rudolf Steiner
Ten Lectures in Dornach in 1922

Published by Anthroposophic Press, Inc. in 1984

Life is a puzzle with an enigma at both ends. Steiner helps to unravel the puzzle and the two enigmas. The words in the title represent the physical, etheric, and astral bodies of humankind. The order of words in the title represent the sequence we pass through these three bodies as we go to sleep and as we die: from physical to etheric to astral. In reverse order we are born on earth and we become awake from sleep each morning. His mapping of these words to our three bodies:

As a physicist I had trouble understanding how the orientation of planets at my birth could have any effect on my life. As a student of Steiner's works, I understand that, in my immense cosmological etheric body prior to my birth, I had set the planets as a birthday feast for my physical body. As Steiner says, "The cosmos is actually nothing else than his physical body expanded to a universe." The setting of the table for my birthday feast became the time/space address of my birthday/birthplace. Thus the issues I came to earth to work on were written in the stars and planets. I was the composer of the symphony, not just a member of the audience, as I had previously thought in my youthful physics days.

When I was born on July 20, 1940, there was no famous event listed on the calendar for that day. As a youth I envied those whose birthdays fell on Washington's birthday or Robert E. Lee's, or even Arbor Day. That longing was to be fulfilled on July 20, 1969 when man set foot on the moon for the first time. This day will be marked on calendars as long as the memory of humankind survives. Through this book I came to understand that the moon acts as an attractive force which pulls a human being back into its physical body from its vast etheric body. Thus I chose to be born on the one day when humankind finally connected its physical body with the physical body of the moon.

There is much, much more in this book. If you can only read one book of Steiner's, read this one. His obscure references in other books to the change in the consciousness of humankind by the Mystery of Golgotha is clearly explained here. This book requires careful study and several readings to mine its wealth of knowledge. Expect to discover insights you not be able to discuss with friends for weeks and months.