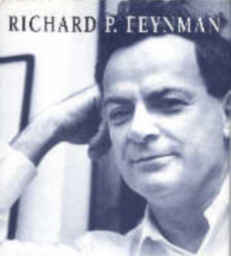 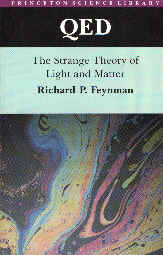 Friends that I went through physics with who used to think physics was boring would be saying, "where was this guy when I needed him?", after reading Feynmann's lecture on QED(quantum electrodynamics). He covers in simple, non-mathematical form the content of several courses in senior level college physics. Separated from the obscure mathematics by Feynmann the form of the electron/photon universe pops out of the quantum noise into a beautiful symmetrical simplicity.

In the place of frequencies and higher mathematical integral functions, Feynmann substitutes the simple stopwatch as an arrow concept. From this humble start he builds the concept of amplitude and multiplying (squaring) amplitudes to produce probabilities that match the experimental results.

This small book could be a textbook for a college course in QED or as an adjunct to the more traditional texts in use. There is one caveat, however, it would take another Richard Feynmann to know how to use it as a textbook.

One receives a bargain for the price of this book, because it is several books in one cover, each book worth the admission price: it is a book of the history of QED, it is a book of humor, it is a book of novel insights into QED, and it is a love letter the science of physics by a man deeply enthralled by his beloved.
Q.E.D.