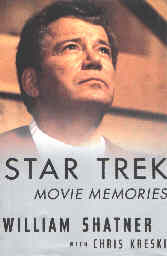 One hardly expects a Contents page to be funny, but Shatner and Kreski have managed it by spoofing the titles of the seven Star Treks movies to create the Chapter headings: Star Trek: The Emotional Picture, II: The Wrath of Bennett et al, III: The Perch for Spock, IV: The Voyage Roams, V: The Frantic Frontier, VI Discovered Country, and VII: Regenerations.

Nor would anyone expect to find humor when, after the TV series is canceled, Shatner spent an entire summer stock season living out of his pickup truck in theater parking lots. Each week when the play moved to a new location, Shatner repacked his aluminum structure in the rear of his pickup truck, move to the new theater, would find a new vacant spot in the parking lot, and set it up again. Inside he could shower, cook, and watch a 6" black and white television set on his stomach. In just such a pose he watched Neil Armstrong set foot on the moon.

Once he was allowed to use a private driveway when there was no theater parking lot. An eleven year boy kept coming by on his bicycle and looking intensely at what he must have thought was Captain Kirk on a mission in his shuttle craft. Guessing what was going on, Kirk walked over to talk to the kid, who greeted him with, "Is Spock on the moon?" Playing along, Kirk showed the kid the shuttlecraft with which he'd left Spock, Bones, and Chekov on the moon. The shower, in Kirk's words, was his transporter and the two shiny chromium knobs were marked H for "Hover in space" and C for "come back". Looking at Morgan, the large odoriferous Doberman that had been sharing the small space with Shatner, the kid asked, "But why is there a dog on your ship?" The dog, in Shatner's imagination became a miniature Klingon horse he was transporting back to Rigel 6, and he explained the odor, "All Klingons smell like that. You get used to it."

The kid went away enchanted by his meeting the famous Star Trek Captain, James Tiberius Kirk, while he was on a mission, and the reader gets to see what was really going on in the newly divorced, out-of-work actor: he felt like he was hovering in space like a stinking Klingon nobody wanted, and all he wanted was to come back as the beloved Captain Kirk. With the phenomenal success of Star Wars, wheels were turning in Hollywood to make that happen.

Humor comes naturally with Shatner, and you get used to it in this book. What you don't expect is the squabbling and internecine warfare during every Star Trek movie's production. Scripts that are updated hourly with one writer overturning what the previous writer had written that very morning. Studios that abruptly slash the budget during the last stages of a movie. Directors promising to keep a reaction during a scene and deleting it from the final film. A movie script written around Eddie Murphy that is dropped when the actor is gone from the picture.

And you don't expect the poignancy of Spock's death scene in Star Trek II, The Wrath of Khan, when the entire stage crew was sniffling and teary-eyed during rehearsals and preliminary screenings.

Seen up close behind the facade of the Enterprise's Bridge, the producers, writers, directors, and cast are real people working against incredible odds to prove that for some thirty odd years, there was intelligent life on Earth, if only in the Star Trek series and movies.

Beam me up, Scotty!