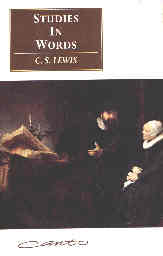 In the older books one knows what one does not understand but in the later one discovers, often after years of contented misreading, that one has been interpolating senses later than those the author intended and all the while one seems to be learning not only about words." [italics mine]

Not only about words, but about the evolution of consciousness as it appears in our changing of the usages of words over the centuries. Finding evidence of the evolution of consciousness in word usages is a game I learned from my readings of Owen Barfield's works. So it is not surprising to find that Lewis, Barfield's personal friend, would say, "...the slightest semantic discomfort in one's reading rouses one, like a terrier, to the game."

Early in this philological masterpiece, Lewis warns us of verbicide, or the murder of a word. He lists the deceased: awfully, tremendous, sadism, unthinkable, and significant, as words that have been killed by overuse.

The charm of this book comes in discovering the roots of common words like kind and villain. Kind is the same root word as kin and villain means a person attached to a villa. This helps me to understand how my godfather's name, Bonvillain, came to seem oxymoronic. Originally it would have meant a "good" "villager". How these words got from their roots to their present meanings makes for delightful discoveries between the covers of this book.

Lewis likes to "drive words of different languages abreast" and this makes for an interesting chariot ride all the way to THE END.