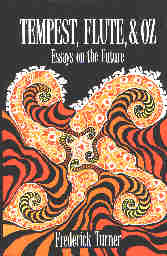 A READER'S JOURNAL, Volume 1
:
Tempest, Flute, and Oz by Frederick Turner
Essays on the Future
Published by Persea Books in 1991
Book Review by Bobby Matherne ©2002

The centerpiece of this book of essays is the title essay which deals with the similar structures of the Tempest, the Magic Flute, and the Wizard of Oz. "We stand on the verge of a new epoch of culture and history." With this said, Turner begins his probing journey into the essence of the newness of our age, "a brilliant and pliable haze of interpenetrating probability-domains." With such polysyllabic mouthfuls, the author takes us on a trip into the future using Tempest, Flute, and Oz as wings.

Consider the mountain landscapes before Wordsworth and Schiller: we considered them trash landscapes, home of outcast bandits, to be driven through in closed coaches and only when absolutely necessary. The two poets taught us to regard mountains as beautiful, as scenery to be admired and doted upon. These two authors were, no doubt, the original Sierra Club, because without their impetus we may yet remain unimpressed by vacant steep landscapes.

In Turner's words, literature is important because:

We interrogate the world according to a prearranged action-pattern which provides our questions with purpose and relevance. In other words, we need a story, a connected series of projected or fictional actions with a beginning, middle, and end, in order to make sense of the world.

The story enables us to compare our current situation and, by placing ourselves in the equivalent position of the story, to anticipate what might happen. Turner's analysis of the three stories of the title bring this book to life by illuminating the similarities of structure that pervade many stories.

"Freedom is an enlargement of the present." By temporarily breaking the interlock of stimulus-response, "a whole universe of intention and creative decision" is possible.

"Deferral of desire itself creates a new pocket of time . . ." It also creates capital for producing goods for others for a profit. Frederick Turner is that rarest of academics, one who speaks positively and insightfully about capitalism and its abundant hope for our collective and individual future.