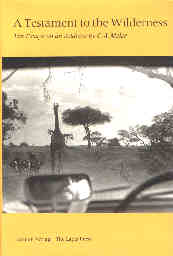 A READER'S JOURNAL, Volume 1
:
A Testament to the Wilderness by C. A. Meier et al
Ten Essays on an Address by C. A. Meier
Published by Quest Books in 1992
Book Review by Bobby Matherne ©2002

This volume in honor of C. A. Meier's 80th birthday begins with his address, "Wilderness and the Search for the Soul of Modern Man." In his discussion of the restoring of harmony between the macro- and microcosm, Meier tells a story told him by Richard Wilhelm who witnessed the events during his stay in China. A region was devastated by drought and famine so locals sent for the famous rain maker. When he arrived, he asked for a secluded place in the wilderness. After three days it snowed in mid-summer, followed by a drenching rain. Asked why it took so long, he said, "When I came to this district I realized it was frighteningly out of Tao, whereby being here myself, I naturally was also out of Tao. All I could do therefore, was to retire into the wilderness (nature) and meditate, so as to get myself back into Tao." Thus when even one person gets centered inside, the conditions outside can return to normal. We might take this as foolishness in the West, but let a new corporate, political, or military leader take over, and we not surprised when suddenly things begin to turn out right.

Mokusen Miyuki in The Arts of Mr. Hun Tun says,

the individuals who Jung says, 'can stand the tension of the opposites in themselves' are those whose egos function in the feminine way, countering the over-developed masculine ego, and allowing the unfathomable operation of the Tao, of yin-yang, to take place.

This quote reminded me of Presidents Reagan and Gorbachev, who in the 1980's, allowed the unfathomable, the dissolution of the Soviet Union, to take place. Both men were criticized by their peers for doing nothing - but by not interfering with the operation of Tao, they allowed the pendulum to swing in the direction of freedom in Russia, an event as hitherto improbable as snow in summer in Washington, DC.

The alien observer 'must first crack the cultural code,' to quote Victor Turner, before he can draw conclusions about their meaningfulness.

It occurs to me that we are all alien observers of our own history (and therefore culture) due to the evolution of consciousness (See Owen Barfield's works). Cracking the cultural code, in Barfield's view, requires a prodigious effort of the imagination to permit us to view our own history as a native of that time. Thus can anthropologists offer much to the study of own culture while studying other foreign and very alien cultures.

This book is very thought-provoking and is a must read for every serious proponent of preserving the wilderness — both inner and outer ones.