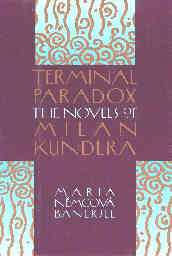 At the time of writing this piece, I have only read the sections of this book that deal with the books of Kundera that I have already read. During my attempt to read the section on The Joke, I felt that I was missing something by not having read the book first, so I skipped to the last two sections on The Book of Laughter and Forgetting and The Unbearable Lightness of Being, both of which I have read. I wanted to be certain that I even wanted to continue reading this book. I did.

How does one review an illumination of a writer's work? I suppose one praises the parts that are brought into a clearer light and illuminates the parts that were left in shadow. Banerjee shines her literary spotlight first on that philo-fool, Milan Kundera, who was born on April 1st, and then shines it on his Book of Laughter and Forgetting. She points to the official act of forgetting by the Czech people after Clementis was executed and "airbrushed" out of the history books. Next she illumines the poetry reading circle rising like a wreath over Wenceslas Square, buoyed upward by their lyricism. This image presages Kundera's next book, The Unbearable Lightness of Being, but I found it on the cover of the paperback edition of Book of Laughter and Forgetting. We sense that Banerjee understands Kundera when she points out, in his own words, "the book is a novel in the form of variations." We sense with her that the infinity of the variations of things is greater than the infinity of things.

Banerjee's treatment of The Unbearable Lightness of Being focuses on the existential plight of Tomas, who stated repeatedly, "Einmal is keinmal," which roughly translates, "Once is none." Tomas longed for repetition, but found repetition to be only kitsch, or repetition not worth having. To me Kundera's goal was to illumine kitsch in this novel. Banerjee makes more note of kitsch than the movie, which barely mentioned it, but her tone shows up best on p. 242 where she says, "The section opens with a digression on kitsch . . ." This statement reminds me of Ernest Rossi's comments on Milton Erickson. Rossi would delete a brilliant metaphoric story and trance induction by Erickson, and replace it with the words, "Here Erickson digresses into a story about his life."

Kitsch, to me, seemed to pervade the novel, e.g., how Tereza first appeared in Tomas's world with the book Anna Karenina in her hands. Later she left for Prague with Karenin, a dog named after the book, in her hands. In the end of the book, Tomas and Tereza died like Anna Karenina, crushed under the weight of a motorized vehicle. Tolstoy opened his book with Anna viewing someone being crushed under a moving train, and Kundera opened his book with Tereza carrying Tolstoy's book. Repetition, kitsch.

As Sabina, Tomas's girl friend, said, as she pondered the kitsch in the epitaphs of the Montparnasse cemetery, "Kitsch is the stopover between being and oblivion." Kitsch, then, might be considered our glimpse at the plans that the greater part of us, our Soul, has made for our stopover in time. If we are vigilant, we might achieve the goal, "Once in a Row is Enough," whereby we recognize the pattern of kitsch in our world at the earliest possible time: the second time it appears.