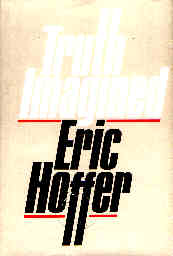 Add Eric Hoffer to the list of men whose writings I wish I'd read while they were alive. And live he did, from 1902-1983, not bad for a man whose nursemaid told him that Hoffers usually died by age 50 and thus caused him to be obsessed by the idea that he'd not live past 40. And so at the age 30 he decides to kill himself by drinking oxalic acid and walks south on Figueroa from Los Angeles till he'd get far enough from civilization that he'd die before help came. He mused while walking what it would be like to be on a long road and to continue walking. He became a hobo, a migrant worker, a gold panner, and spent all his free time reading. When he'd encounter a question about life, such as 'why do seedlings sprout up and roots down,' he'd probe until the answer would appear to him, perhaps in a seed catalogue. One answer he found in a booklet that contained so many answers, he carried it around with him constantly (the only edition in his portable library). Then one day in his alfresco train car, he tossed this booklet away, because he feared that having all the answers was making his thinking unnecessary. When a German farmer who picked him up and gave him a ride to Anaheim quoted Goethe on "hope," Hoffer searched the only volume by Goethe in the Anaheim library till he found the quote: it was about "courage" not hope. One interesting not: because his father called him "idiot" as a child, Hoffer read Dostoevski's "The Idiot" once a year every year of his life. He undoubtedly deserves mention in the Guiness Book of Records for the most readings of "The Idiot."

Best of all, Hoffer is a delight to read. His prose is easy and entertaining while being thought provoking. I read it while in the middle of struggling through Carl Jung's Psychological Types and it was like walking outdoors after a long imprisonment indoors. I read Hoffer's book in about 3 hours on a picnic blanket in City Park. (Jung's book I'd been working on for over 3 weeks.)

Hoffer has definitely moved into the "buy-every-one-of-his-books" category of authors for me. I will save them for use as a palate cleanser like a pineapple sherbet in the middle of a ten course meal.