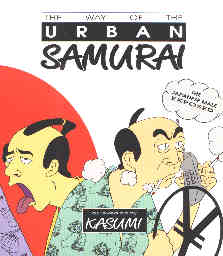 The Way of the Urban Samurai
as revealed by
Kasumi
CAUTION: Federal Law Prohibits any Minor from Viewing this Webpage due to the Presence of Tertiary Smoke.
Published by Charles E. Tuttle in 1992

Consider this cartoon-laden book a serious crash course in the urban samurai who populates the boardrooms and offices of modern Japan. Kasumi ("Out of respect for her ancestors and hairdresser, she does not reveal her last name.") reveals the facts and foibles of this modern bastion of Japanese manhood, the urban samurai, may he live a thousand years. (Banzai!) Her qualifications to write this book are:

1) She was married to one for nine years so got to observe one carefully (but not up close).

2) She is a woman so she brings a meta-perspective to the task that another urban samurai would necessarily lack.

3) She has a tremendous flair for the comedic juxtaposition of words and concepts, e. g., "the rice is in the mail," "saving face and other body parts," and "should one bow before sex?"

The book kept me laughing out loud on nearly every page. The cartoons are hilarious caricatures of Japanese life, such as the one on etiquette: "Should You Or Shouldn't You Bow Before Sex?" The correct question is exactly how low: "Bowing levels, which are calculated to correspond to the Nikkei index, are listed daily in all major financial institutions." The cartoon that accompanies the text shows an urban samurai, partially dazed and partially dressed, lying with his woman's arms around him. In her left hand is a diet cola, in her right, a lit cigarette and a calculator. His Highness is wearing a set of stereo headphones, has a cigarette in his visible hand, while a Stock Market Report, a copy of Investor's Daily, and a 35mm camera are lying nearby. One can only guess what his other hand is doing.

Some of my favorite parts of this book were:

This is a fun book, but one that should be avoided by anyone who has recently quit smoking, as most of the cartoons have characters with lit cigarettes in their hands and mouths. Recent studies have shown the deleterious effect of tertiary smoke, which may be defined as a hazard that involves looking at images of people smoking. Overall a fine addition to Edo Period section of anyone's library.

To Shine One Corner of the World — Stories of a Zen Master Told by his Students edited by David Chadwick
Zen and the Way of the Sword — Arming the Samurai Psycheby Winston L. King
Blowing Zen — Art of the Shakuhachi Zen Flute by Ray Brooks
A Zen Wave by Robert Aitken Basho's Haiku & Zen
The Three-Cornered World — Kusa makura — the Grass Pillow by Soseki
NP — A Novel by Banana Yoshimoto
Zen in the Art of Archery by Eugen Herrigel
Zen in the Art of Flower Arranging by Gustie L. Herrigel
The Method of Zen by Eugen Herrigel


Discover Freedom on the Half Shell

What are the oysters talking about? Click Here to find out.