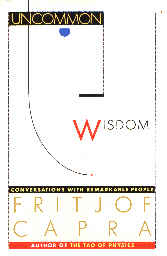 In "Uncommon Wisdom" Fritjof Capra takes us inside his thoughts and experiences while writing "Turning Point." We get to meet his two greatest mentors: Stanislaw Grop and R. D. Laing. We accompany him in his meetings with Gregory Bateson, Margaret Lock, Werner Heisenberg, Indira Gandhi, Carl Simonton and many others.

In Bateson's presence he learns about cybernetic systems and "the pattern that connects." From Grop he learns that in the over 3,000 cases of LSD he studied, no two ever had exactly the same outcomes - the responses were completely dependent on the individual. From Laing he learns that process is stronger than content: rather than talk about emotionally induced asthma, Laing would create it, rather than talk about a double-bind he'd put Capra into one. From Simonton he learns that "cancer cells are weak cells" not strong ones and that an individual's response to cancer is stronger than any chemicals in the AMA's drug closet.

In his meeting with feminists we find that Capra's radical left-leaning parts coming out of the closet in the form of "shoulds" marching troop-like across the pages. We should do such and such for women's rights, for the environment, etc. His chapter "Future Visions" would be better labelled "Futile Visions."

The Saragossa Dialogues are a useful rehashing of the medical-metaphysical view of healing - particularly for its careful statement of the establishment's position on healing. Leonard Shlain takes Carl Simonton to task for selecting his patients and is afraid "MD's will view his statistics and say 'let's adopt this as a national policy.'" My thought is that "are MD's really so dumb?" They must be if one of their best supporters is concerned that they will generalize lasciviously without discernment, throw away everything they've learned about alternate approaches to healing patients of cancer, and adopt a view such as Simonton's that is so alien to their schooling and practice. (That Simonton's approach might actually work better than their massive assault tactics is besides the point, or is it?)

This book is useful for insights into the people of Fritjof Capra's world if you're interested in them. Not much new from Capra's mind.