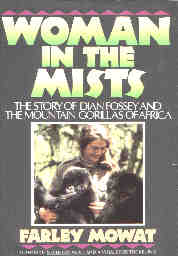 A READER'S JOURNAL, Volume 1
:
Woman in the Mists
by
Farley Mowat
The Story of Dian Fossey and the Mountain Gorillas of Africa
Published by Warner Communications in 1987
Book Review by Bobby Matherne ©2002

When a friend suggested I read Never Cry Wolf by Farley Mowat in 1969 I said I never read books about animals, but I would read it anyway. The book turned out to be about that most curious and humorous of animals called man, in that case, Farley himself.

In Woman in the Mists Farley reprises Never Cry Wolf, but this time the main character is Dian Fossey and the companion animals are gorillas, mountain gorillas in the wilds of the Varunga Mountains. Like Farley, who came to love and understand wolves, Dian came to love and understand the mountain gorillas. She called on her work with autistic patients for new strategies for habituating gorillas to humans. After months of work, she was able to make physical contact with the gorillas, becoming an adopted member of the group -- playing, wrestling, hugging, cooing, chest-beating, and even given to long, thoughtful staring when a favorite gorilla named Tiger was suffering from chest wounds. The gorilla scenes are touching and made me yearn for a world in which such majestic animals would be allowed to live in peace.

But there is little peace in Dian's life outside of the time she spent with her gorillas. She was beset by physical ailments (pneumonia, emphysema, kidneys, corneal growths, sciatica, heart murmurs, stress fractures of her feet, and broken ribs just to mention a few) and psychological ailments in the form of continual betrayals, including the theft of her ideas and the products of her work at her mountain camp Karisoke . When her beloved gorilla, Digit, was beheaded for a trophy room, she established a fund in his name. Shortly thereafter all the funds she had collected were re-appropriated (stolen) by bureaucrats and funneled into building parking lots to bring more of the very tourists Dian was dedicated to eliminating from the gorilla park.

Bereft of the support she helped create, she used her personal savings to dismantle traps and to provide patrols to scare off and capture poachers of the gorillas. The poachers did to the gorillas what Harcourt, the VW couple, and park officials did to Dian's work. They took away every piece, idea, credit, camera, gun, lamp, and goodness they could get their hands on and justified it to themselves and the world as being for the good of the gorillas. Only in her death did these meta-poachers rid themselves of the Woman in the Mists.

Thanks to Mowat's book, we can long remember the work and the indomitable spirit of this unique and courageous woman of the mists.