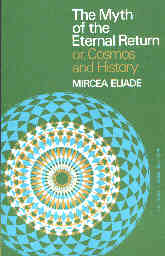 A READER'S JOURNAL, Volume 1
:
The Myth of the Eternal Return by Mircea Eliade
or, Cosmos and History
Published by Princeton University Press, NJ, in 1974
Book Review by Bobby Matherne ©2002


This is the earliest and most important of Eliade's book on comparative religions (in his opinion). He traces through the many scripts and dogmas of the world's official and unofficial (i.e., primitive) religions the myth of the eternal return. It reminded me of the popular movie of the time called The Gods Must be Crazy in which a Coke bottle discarded from an airplane hits a Masai warrior on the head and he spends the remainder of the movie trying to return the bottle to the Gods who must have created this object of some unknown hard substance and lost it during some careless act.

Eliade points to a Seth-type of simultaneous time in which the repetition of an exemplary pattern produces a timeless stasis to the event. (He calls it "archetype" and later has to apologetically point out that his use of the word differs from Jung's more restrictive use in connection with the collective unconscious.)

The mason when he drives a stake into the ground to support the cornerstone kills the world snake by penetrating its skull and thus "centers" the building at the center of the world, just as in illo tempo. This is a latin phrase, which, when repeated as often as Eliade does, seems more natural to use than the simple English form, in the beginning.

He discusses ad nauseam that the contrast between the linear time progression of the Western Judeo-Christian traditions and the cyclic repetitions of Eastern Hindu-Buddhist traditions.

In the penultimate page of the book he says, "Faith . . . means absolute freedom from any kind of natural law." I differ with Eliade here because I believe that, rightly understood, Faith is the highest form of natural law. It is that form that I call EAT-O-TWIST or Everything Allways Turns Out The Way It's Supposed To. Faith in this sense refers to the process of supposing, i.e. , to an internal, stabilized representation of the desired result which, when held long enough, creates the desired or supposed outcome. In the 100th Monkey Effect, it supposed that when the hundredth monkey discovers the benefit of washing yams before eating them, that knowledge spreads to the rest of the monkeys. In EAT-O-TWIST, it may be the 100th time period or 100th repetition that does the trick.