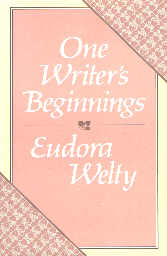 My first exposure to Eudora Welty and a pleasant one. This book is a recounting of experiences of her life as they affected her becoming a writer. Stories such as her mother's getting a full set of Dickens books in exchange for getting her hair cut short ("long hair weighs a woman down"). Then later here mother charged back into the burning house to toss out the Dickens set and then herself. These books later formed the basis for Eudora's reading as she was growing up.

Her book is divided into chapters on Listening, Seeing, and Finding a Voice - which chapters seem to trace her progress from hearing and seeing to finally becoming a writer. One beautiful point she makes early in the book is about what voice she heard as she read books and then what voice she heard as she read her own writings. Her proofing and rewriting were accomplished by giving that voice the words that allowed it to sound right. One of the things I've learned in the 13 years since I first read this book is that if your sentences sound right to you during proofing, they will sound right to others reading it later. If they don't sound right, and you don't change them, you should really consider some other line of work than writing. Annie Dillard in The Writing Life says that one must like sentences to be a writer.

In the latter portion of the book Eudora recounts her family's trips home to West Virginia to her mother's father and to Ohio to her father's father. During the trips her mother's hat hung down and bumped the kids on the head. The kids' legs stretched horizontally over the suitcases. No trunks for luggage storage in their 1915 vintage Oakland. The tools clattered under the rear seat whenever they hit a bump.

The "boys" (her mother's brothers) picked up their banjos upon entering the house and began plinking in fast beat unison one song after another, and seven-year-old Eudora kept asking for more and more well past her bed-time. Her cold drink from the mountain well and the echoes of the cow bells from the top of the mountain stayed in her memory. These are samples of the images and sounds that Eudora calls up in the reader from her beginnings.