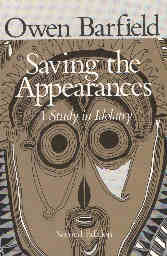 Saving the Appearances by Owen Barfield
A Study in Idolatry
Published by Wesleyan Univ. Press in 1988
Book Review by Bobby Matherne ©2002

Several times in one's life one comes across a book that causes one to view the entire world differently. Three of those were Science and Sanity (Korzybski), Steps to an Ecology of Mind (Bateson), and Chaos (Gleick). Barfield's book had just such an impact on me and caused me to want to reread every other book I'd ever read. Words, Barfield tells us, are idols. This new understanding of my rampant idolatry as a youth makes me want to revisit my favorite temples (books).

Little by little we subtract
Faith and fallacy from fact
The illusory from the true
And starve upon the residue.

This quatrain neatly summarizes the process of moving away from participation and the resultant hollowing-out of the meaning of words and life till only an antiseptic paper shell remains. My faint fires of realization of the poem's meaning have been stoked into a roaring blaze by Barfield's insights into the process called participation. What so attracted me to the stanza was the similarity of my life with the history of mankind from original participation (man wore the world like a coat) to the de-participated 19th century of science (coat is separate from man) to final participation (coat can be worn or taken off). Thus arrived at final participation, we return to where we were in the beginning and we are in a different place. We have, in Barfield's metaphor, rediscovered the fountain of life that we had replaced with a system of laws.

Why was Moses so angry with his people making idols when he returned with a system of laws from the mountain? Was it projection on his part? Was he angry with them for creating idols of gold because (out of his awareness) he was creating idols of words? The reason the name of God was so rarely spoken by the Jewish people was because the word itself was an idol. Kept in their secret heart of hearts, they took it out and spoke it only on the holiest of occasions.